Marshall Walter “Major” Taylor
100 years before Lance Armstrong became a famed American bicycle racer in what is considered a ‘European’ sport, another American rider amassed fame and glory on the bicycle racing tracks of the world: Marshall ‘Major’ Taylor. The first African-American sportsman outside boxing to become internationally famous, 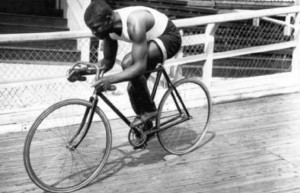 At age 12, Taylor received his first bicycle and became such an expert trick rider that a local bike shop owner hired him to stage exhibitions and perform cycling stunts outside his bicycle shop.
Taylor turned professional in 1896 at the age of 18 and soon emerged as the “most formidable racer in America.” One of his biggest supporters was President Theodore Roosevelt who kept track of Taylor throughout his 17-year racing career.
It wan’t just America that he raced in.
In 1902 “Major” Taylor participated in a European tour in 1902 where he entered not one but 57 races and won 40 of them, he beat the champions of Germany, England and France.
Wait it doesn’t end there, he also raced in Australia and New Zealand, during February 1903, Taylor was competing in the Sydney New South Wales handicap for a $5,000 prize and the headline flashed worldwide was “Rich Cycle Race.”
Taylor’s career was still held back by racism in his own country particularly in the Southern states of American where he was not permitted to compete against white cyclist, although he was greatly celebrated abroad, particularly in France.
During his career he had ice water thrown at him during races, and nails scattered in front of his wheels, and was often boxed in by other riders, preventing the sprints to the front of the pack at which he was so successful. 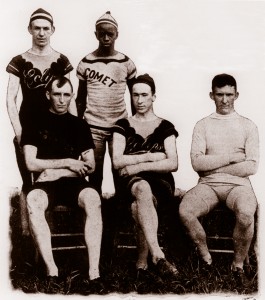 Couldn’t find any useful video footage but there is some books about the man, “Major Taylor: The Fastest Bicycle Rider in the World” by Author Andrew Ritchie.
Here are some quotes from the man him self
“Life is too short for any man to hold bitterness in his heart.”—Marshall Taylor
“There are positively no mental, physical or moral attainments too lofty for the Negro to accomplish if granted a fair and equal opportunity.”—Marshall Taylor
“I trust they will use that terrible prejudice as an inspiration to struggle on to the heights in their chosen vocations.”—Marshall Taylor
“A real honest-to-goodness champion can always win on the merits.”—Marshall Taylor
I’m always interested in good music, videos and news, Please drop me an email if you find anything that would be of interest, thanks
DjDrFusion
Marshall Walter Taylor