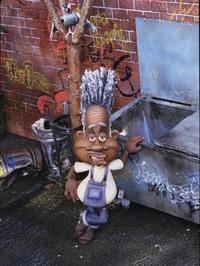 The PJs is an American stop-motion animated television series, created by Eddie Murphy, Larry Wilmore, and Steve Tompkins. It portrayed life in an urban public housing project, modeled after the Brewster-Douglass housing projects in Detroit that once housed Diana Ross and Lily Tomlin. The series starred Eddie Murphy.
Forty episodes were aired during the show’s three-year run. There were still 6 episodes left over, which were produced by Warner Bros. Each episode took over two months to produce, owing to the laborious stop motion process. Originally broadcast on FOX, the show later moved to The WB in 2000-2001, but was soon cancelled due to its high budget. The last three episodes were not aired until 2003. Reruns previously aired on Trio, a cable television network. The show was picked up for Adult Swim and began showing on December 29, 2008.
The PJs won three Emmy Awards and one Annie Award during its run. Some social activists, including director Spike Lee, accused the show of depicting a negative racial view of the projects. Quincy Jones’ son QD3 along with George Clinton produced the theme music for the show. On Adult Swim, the show is rated TV-PG.Starting in November 2008 The PJ’s started to air on an all-black TV channel “TV ONE”.

cartoon crazy The PJ’s Pinky And The Brain

21 thoughts on “cartoon crazy The PJ’s”