Native American Indians
And the uproot of these people still goes on today.
A law revised and submitted to Congress by Senator John McCain and others before him was determined to be the root cause of violations, which after ratification by President Clinton in 1999 during a globally publicized sit in by Songstress Julia Butterfly Hill at Big Mountain, Arizona. The enactment led to the removal of the Dineh band of Navajo from the Black Mesa to free the lands up to mining, and could lead to relocation of the Dineh-Navaho from Big Mountain, all based on a tissue of deceit, false claims of prior ownership by a small group of paid Arizona locals of Indian descent led by one Wayne Taylor, working for McCain and Peabody.

To facilitate his special interests, the Peabody Western Coal Company, which by the way is the largest Coal Company in the US and the Mohave Generating Facility in Laughlin delivering low cost electricity to Las Vegas’s Casinos, John McCain introduced and arranged for the enforcement of unethical and Constitutionally unlawful legislation’s which brutally displaced thousands of Navajo farmers onto a Nuclear Waste Dump to live after brutalizing them for two decades in peaceful resistance. McCain assembled illegal and unethical enactments designed to force Native American Navajo of the Dineh Band off their Arizona lands, moving them onto Church’s Hill in Nevada, depriving them of lands they’ve owned since 1500 AD.
click image below

James Earl Jones narrates a stunning and informative documentary “Black Indians: An American Story”, which explores issues of racial identity between the mixed-descent peoples of both Native American and African heritage. James Earl Jones is himself a Black Indian. 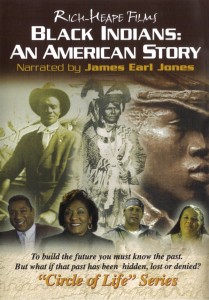 I find it very strange that a country like the United States of American with its so called SAY about HUMAN RIGHTS around the globe!
Are you aware of the Indigenous peoples of the Americas, the so called Native American Indians you have to remember these people lived throughout the whole continent, from north America, central and south America including the Caribbean and their history goes beyond 12th century lets not forget the Inca Empire or the specifics of Paleo-Indian migration to and throughout the Americas, evidence suggests big animal hunters may have crossed Bering Strait from Asia into North America over ice bridges some 15,000 years ago.
here is a video that looks at Tracking The First Americans

Looking at the history of America I noticed it only went back to 1492 this is when Christopher Columbus is said to have discover America, up until then it is estimated that there was something like over 100 million inhabitants. Most figure for Indigenous peoples in the Americas before the 1492 voyage of Columbus has proven difficult to establish. Scholars rely on archaeological data and written records from settlers from the Old World. Most scholars writing at the end of the 19th century estimated that before this time the population was about 10 million, by the end of the 20th century the scholarly consensus had shifted to about 50 million, with some arguing for 100 million or more.

Nevertheless 4 hundred ears later it had been reduced to just 237 thousand, that’s over 95% gone forever.
When Columbus returned in 1493 he brought a force of 17 ships. He began to implement slavery and mass-extermination of the Taino population of the Caribbean. Within three years five million were dead. Fifty years later the Spanish census recorded only 200 living! Las Casas, the primary historian of the Columbian era, writes of numerous accounts of the horrendous acts that the Spanish colonists inflicted upon the indigenous people, which included hanging them en masse, roasting them on spits, hacking their children into pieces to be used as dog food.
click image below 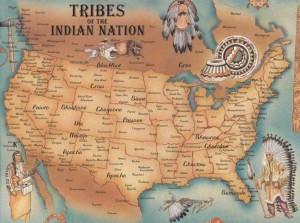 Now in at the beginning of the 1830’s, nearly 125,000 Native Americans lived on millions of acres of land in Georgia, Tennessee, Alabama, North Carolina and Florida–land their ancestors had occupied and cultivated for generations. By the end of the decade, very few natives remained anywhere in the southeastern United States. Working on behalf of white settlers who wanted to grow cotton on the Indians’ land, the federal government forced them to leave their homelands and walk thousands of miles to a specially designated “Indian territory” across the Mississippi River. This difficult and sometimes deadly journey is known as the Trail of Tears. The Indian-removal process continued. In 1836, the federal government drove the Creeks from their land for the last time: 3,500 of the 15,000 Creeks who set out for Oklahoma did not survive the trip.

It is said that Adolph Hitler admired the camps for the American Indians and often praised the efficiency the American’s extermination of them.


I’m always interested in good music, videos and news, Please drop me an email if you find anything that would be of interest, thanks
DjDrFusion

Indigenous peoples of the Americas

41 thoughts on “Indigenous peoples of the Americas”