Jim Kelly became the first Black martial arts film star, he also worked with Bruce Lee in the blockbuster, Enter the Dragon 1973. He was one of the first black actor to have a major part in a martial arts film.
On June 29, 2013, Kelly died of cancer at his home in San Diego, California. Kelly was 67 years old. 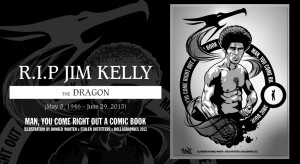