“There are still times I feel unhappy and I must smile, and there are times I want to cry and I must laugh… people rarely see the real Marvin Gaye”

“No doubt I could have been a Hollywood star, but it was something I consciously rejected. Not that I didn´t wan´t it. I most certainly did. I just didn´t have the fortitude to play the Hollywood game and put my ass out there like a piece of meat.”

“Years back, when we were still in Detroit, Berry saw my acting potential, even before he started pushing Diana. He wanted to do the Sam Cooke story and have me play the lead. This was in 1964 when Sam had just died. I told Berry the idea was morbid. I got the chills thinking about it. There was no way I´d even consider the role. It made me extreamly nervous to even think about a soul singer who gets shot to death.”

“As an artist you want to record songs you feel strongly about. But, in my case, I don’t think commercially. As a recod man, Larkin Arnold thinks commercially and since he and CBS have been so marvellous to me, I decided to give them artistic control” -Marvin at the time of Midnight Love
words from the late Marvin Gaye 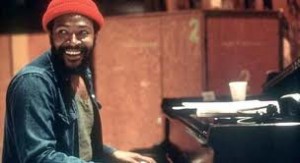