Sarah Vaughan
Born March 27, 1924 Sarah Vaughan was a jazz vocalist who got her start as a child singing in her church choir, but is was 1942 when Sarah was 18 years old she was thrust into the spotlight after a winning performance at Amateur Night at the famed Apollo Theatre, a year later in 1943 to open for Ella Fitzgerald, and by the mid-1940’s she was appearing on television.
Sarah Vaughan began her solo career in 1945 by freelancing in clubs on New York’s 52nd Street such as the Three Deuces, the Famous Door, the Downbeat and the Onyx Club. On May 11, 1945, Vaughan recorded “Lover Man” for the Guild label with a quintet featuring Gillespie and Parker with Al Haig on piano, Curly Russell on double bass and Sid Catlett on drums.
There is so much I could write about this lady but I’m sure it’s all been said before.
The reason I put a page up is quits simple, Sarah recorded an album in 1978 with Oscar Peterson called “How long has this been going on”, I’m not too sure if you can still get it, nevertheless I have to admit, love listening to this lady. 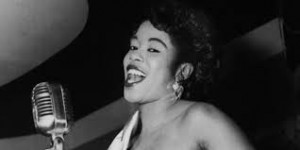