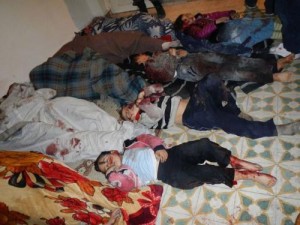 The Sabra and Shatila massacre was the slaughter of between 762 and 3,500 civilians, mostly Palestinian and Lebanese Shia, by a Lebanese Christian Phalangist militia in the Sabra and Shatila Palestinian refugee camps in Beirut, Lebanon.
The massacre started 6:00 pm 16 September to 8:00 am 18 September 1982.
In 1983, the Israeli Kahan Commission, appointed to investigate the incident, found that Israeli military personnel, aware that a massacre was in progress, had failed to take serious steps to stop it. Thus Israel was indirectly responsible, while Ariel Sharon, then Defense Minister, bore personal responsibility, forcing him to resign. And this very same man was elected Prime Minister of Israel in February 2001.