Marcus Garvey
17 August markes the day of a legend, for on this day in 1887 in a small town called St Ann’s in Jamaica Marcus Mosiah Garvey, Jr was born.
At a time when slavery was still alive in the south, and black people didn’t have the right to vote in America.
Having had the chance to look in to my own history, and I say my own because up until recently the only history I was told was from a white man’s point of view, which he read from a book written by a white man.
But that;s another story and another post!!
I have a post called “braking the mould” which looks at the achievements of black people reaching the top of there game, regardless of the obstacles placed by white people, its legend like these that gives me hope, that make me smile, that helps me see the light through the tunnel.
There was a time where I was in a dark place, but nothing like what I’ve read about in my history, but nevertheless, it was there where I started to read about Marcus Garvey and the hope he gave  people, it was like it showed me how lucky I really am, our history is very important.
Anyway I’ve put together some documentary’s and the first one is a speech he made, here is a rare chance to hear the man him self.
Garveyism 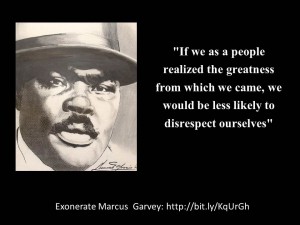 Marcus Garvey was a Jamaican-born black nationalist founded the Universal Negro Improvement Association (UNIA) created a ‘Back to Africa’ movement in the United States. He became an inspirational figure for later Civil/Human rights activists including Malcolm X who’s father Earl Little, a Baptist preacher worked with Marcus Garvey before he was murdered by white supremacists.