Born December 9, 1922 till October 11, 1991 John Elroy Sanford or better known as Redd Foxx, was an American comedian and actor, best remembered for his explicit comedy records and his starring role on the 1970s sitcom Sanford and Son.

Foxx gained notoriety with his nightclub act during the 1950’s and 1960’s, at the time his style was considered somewhat raunchy. His big break came after singer Dinah Washington insisted that he come to Los Angeles, where Dootsie Williams of Dootone records caught his act at the Brass Rail nightclub. Foxx was signed to a long-term contract and released a series of comedy albums that quickly became cult favorites. 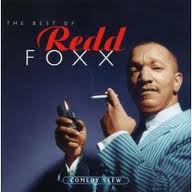 Humour is infectious. The sound of roaring laughter is far more contagious than any cough, sniffle, or sneeze. When laughter is shared, it binds people together and increases happiness and intimacy. Laughter also triggers healthy physical changes in the body. Humour and laughter strengthen your immune system, boost your energy, diminish pain, and protect you from the damaging effects of stress. Best of all, this priceless medicine is fun, free, and easy to use.