Micasa Music is a house band based in Johannesburg, South Africa and consisting of 3 members, Dr. Duda (producer) and pianist, Jsomething (vocalist and guitarist), and Mo-T (trumpeter). The band was formed in early 2011 in Johannesburg when all three future members were at a night lounge and decided to perform together. A few months later, they released an album titled Micasa Music, which “went gold” quickly and won several awards at the 18th Annual MTN South Africa Music Awards in 2012.
At the moment there CD is suck in the Cd player, every tune leaves you with a huge smile, this is a great band with a wonderful sound from the heart of South Africa 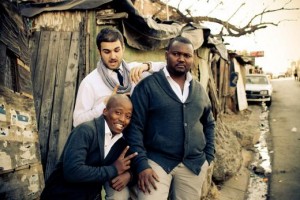