Segregation
Through non-violent and more direct methods, people rally to fight segregation in South Africa, and several racist states in the United States like Georgia, Mississipi and Alabama. In the United States state President Eisenhower uses federal troops to uphold the Constitutional rights of African American students during the Little Rock integration crisis. This action emboldens the civil rights movement to further confront Jim Crow laws through the sit-ins, the freedom rides, the March on Washington and the Selma to Montgomery marches. In South Africa from 1948 white supremacy is vigorously enforced through apartheid, pass laws, the Group Areas Act and other measures as well as other petty apartheid with legal recourse to protest denied. Incidents in Sharpeville and Soweto catalyse the grievences of Africans into direct action, forcing the Government to eventually negotiate with the ANC, free Nelson Mandela and hold South Africa’s first democratic election in 1994. 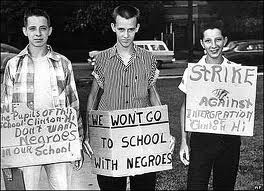